In March, the American Dental Association asked dentists to only perform urgent procedures during COVID-19 outbreak. In addition, OSHA recommends safe work practices such as the use of personal protective equipment (PPE) as well as routine cleaning and disinfection procedures that include the use of “high-efficiency particulate air (HEPA) filters or filters of equivalent or superior efficiency”.

This guide is written for dental offices to assist in how to choose the right HEPA filtration system and is based on questions we have received from dentists. The focus will be on how to clean rooms in a dental operatory and the waiting area.

First, we will give a brief overview of HEPA filters and how to compare air purifier performance. 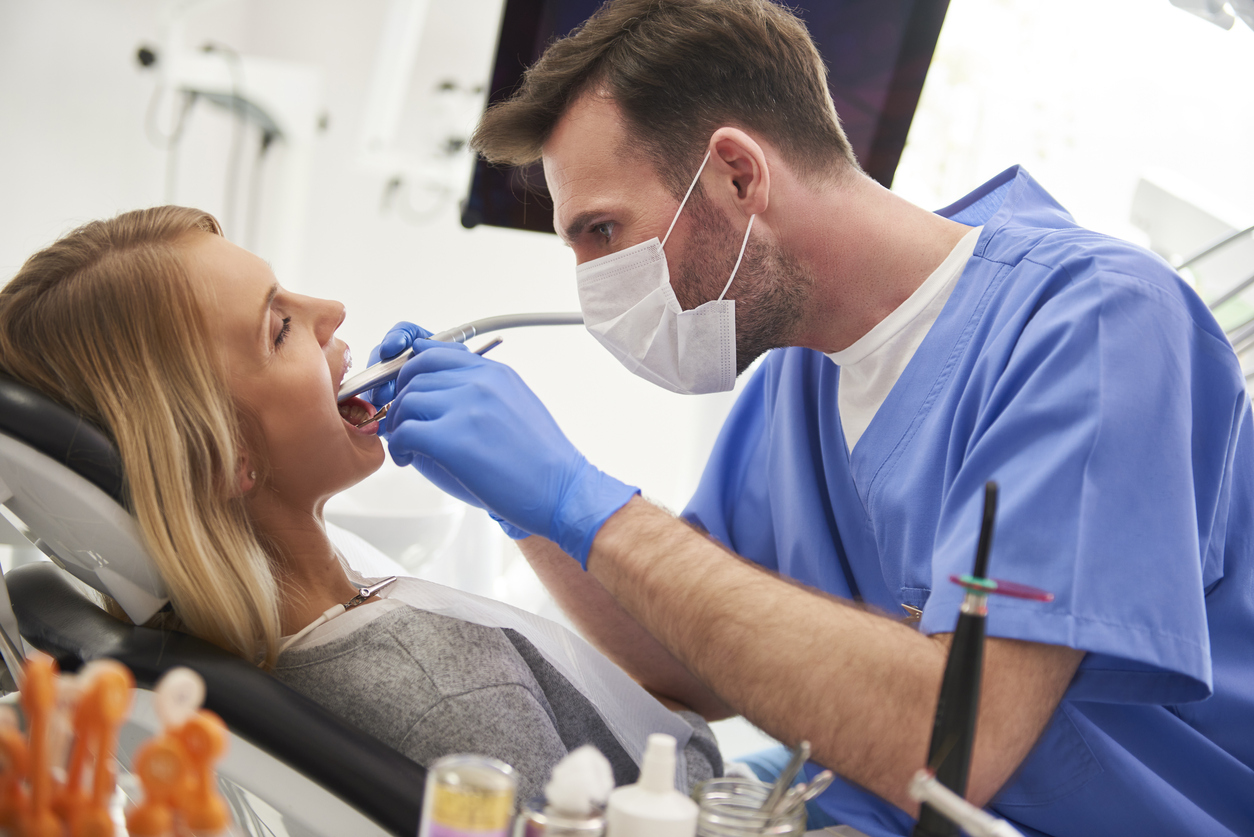 In comparison, the N95 masks are rated to remove 95% of particles down to 0.3 microns.

What Size are Viruses and Bacteria?

For viruses how well do your air filters work from 0.02 to 0.4 microns?

Testing standards are set at the 0.3 micron size so testing data is not readily available for the smaller sizes. To address we sent our Max and EJ120 HEPA filters to one of the few test labs that will test the performance against nano-sized particles.

Here is a summary of the results.

There are two forces at work in a HEPA filter. Interception is the effect of the fibers catching particles that are larger than the opening in the filter fibers. Diffusion is the effect of the smallest sized particles that collide with one another and therefore are able to be collected in the HEPA filter fibers. The efficiency related to diffusion increases significantly as the particle size approaches zero.

According to Science Direct, “High Efficiency Particulate Air (HEPA) filters are available that have efficiency greater than or equal to 99.97% even at the MPPS (most penetrating particle size). For particles with diameters between 2 nm (0.02 microns) and the MPPS, HEPA filter users should be confident that the efficiency will be at least 99.97% when the filter is new.”

In short, for particle removal of nanometer sizes the higher the HEPA filter efficiency, the better.

How long does it take to clean the air in a room after aerosol producing procedures?

This is a function of the amount of air flow. Air purifiers are tested to a standard called the CADR (Clean Air Delivery Rate). This represents the volume of clean air produced at various particle sizes in CFM (cubic feet per minute). It is based on a ceiling height of 8 ft.

You will want to use the Smoke CADR since that is based on the smallest particle sizes (0.3 microns). The other two measurements are called Dust and Pollen and should be ignored in this case.

Here is a chart that shows the smoke CADR for our air cleaners and the number of air changes per hour for various sized rooms. 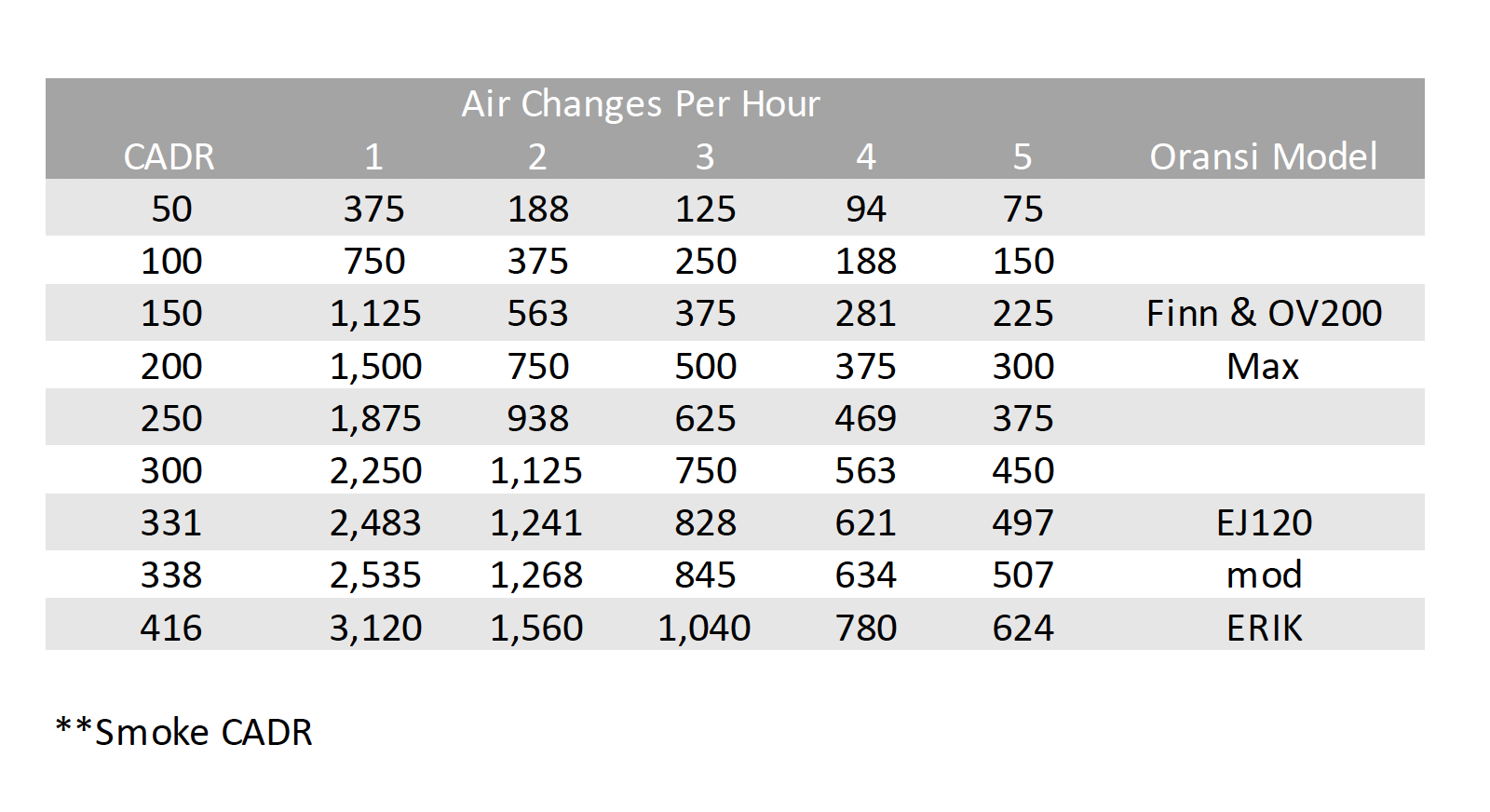 What would the CADR be to change air in a room 150 sq ft with 9 foot ceilings in 5 minutes?

Tip: Take the cubic foot size of your room and divide by the number of minutes you want it to be cleaned. The result is the minimum CADR of the air purifier for that space.

Can they be wall mounted?

Our air purifiers are meant to be placed on flat, secure surfaces. They can be placed on a shelf provided there is at least one foot of clearance to the front, top and left/right sides.

Which air purifier is suitable for a dental office? Mainly in the treatment room.

Any of our models could work depending upon the room size. Our mod air purifier, EJ120 and Erik650A models have the highest efficient filters so they will do better with catching the smallest sized airborne particles. Of these three, the mod air purifier is the best combination of high efficiency, high air flow plus a lower price point.

Also, as described above please make sure the air purifier has sufficient air flow for the space size.

How many air changes per hour for a waiting area?

How long does it take for a delivery?

Our warehouse is in Kentucky and usually ship orders placed Monday-Friday by 2pm EST. If we are out of stock we will state the expected ship date on the product page. For UPS transit times please see our shipping map.