The United States has made some impressive strides towards reducing air pollution.

In 1948, the town of Donora, Pennsylvania turned black for five straight days due to industrial exhaust composed of metal dust, carbon monoxide, and sulfur dioxide. Nearly 40 people were killed.

This story, which is often referenced by the EPA and news publications, is seen as a major wake-up call for air conditions. What a burning river in Cleveland, did for nation-wide awareness of water pollution, the Donora disaster did for air pollution; only it occurred 20 years earlier.

Change can move slowly of course, and in the 1970’s, air pollution still remained a health concern (as it does today).

However, statistics from the EPA show a massive reduction in air pollutants. Lead-based air pollution, for example, has decreased 99% between 1980 and 2016. Carbon monoxide emissions have dropped 73% in the same period, and airborne particle matter has been reduced by 57%.

So, does this mean we’re free and clear?

Is air pollution no longer a concern?

Air pollution remains a health issue in our country and across the globe. Some places are certainly better than others, but if you live in a high pollution city, you need to be aware of air pollution and make the right choices to maintain better health. 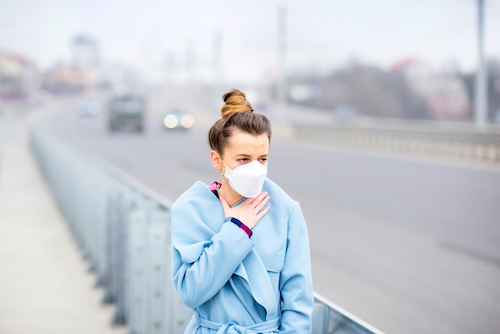 What is Outdoor Air Pollution?

One of the challenges of reducing air pollution and keeping airborne contaminants from harming your body is that the pollution comes in many different forms.

Poor air quality comes from different sources, reacts with the environment in different ways, and spreads at different rates.

However, there are a few important types of air pollution that you should understand.

Ozone, a gas made of three oxygen atoms, is found naturally in our environment.

Stratospheric ozone, the good kind, resides in the upper atmosphere, creating the protective layer that keeps the sun’s rays in check.

The bad type of ozone is called tropospheric, and this is the kind that is produced by cars, power plants, and other industrial sources.

While ozone in the stratosphere is our friend, ground-level ozone is a harmful pollutant.

For more information about ozone, see our article on the risks of ozone generators.

Harmful ozone is most common on sunny days in densely-populated urban areas.

However, it can travel with the wind, making it a threat for nearby rural locations.

Particulate matter air pollution refers to any solid or liquid particles that are floating in the environment. This type of pollution can be made of many different materials, including dust, soot, smoke, moisture, and more.

It’s one of the few forms of air pollution that you can see; large amounts of dust kicked up by a windstorm are the perfect example.

PM2.5 is the metric most widely used to assess health risks since it represents the smallest particles. Those that are most likely to be breathed in.

As a side note, the US Embassy in Beijing began to record the daily PM2.5 a few years ago and has been influential in measuring the air quality in certain regions of China.

While the EPA lumps these into separate categories, for the sake of this article we’ll simply inform you that air pollution comes from different chemicals, especially carbon monoxide, sulfur dioxide, and nitrogen dioxide.

Each one comes from different sources (in part or in full) and has various effects on both the environment and human health.

These, as well as many other contributors, can make air pollution a problem across the globe. 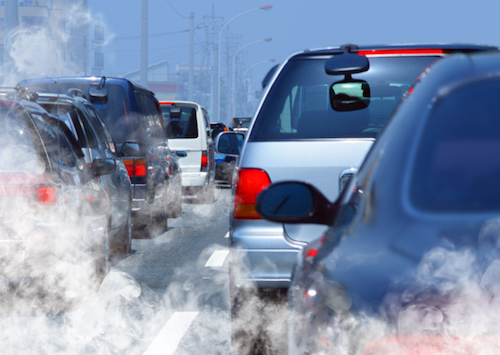 Outdoor Air Pollution and Your Health: A Fast Look

Air pollution is not just an annoyance. In fact, the problem has been linked to increased risk of stroke, heart attack, lung cancer, and respiratory diseases such as asthma. There is a direct correlation between air pollution and heart health.

The WHO estimates that this issue caused three million premature deaths in 2012, which largely occurred in low to middle-income regions of the globe.

What Areas Have the Highest Amounts of Air Pollution?

As we discussed earlier, the U.S.A. has made impressive improvements in the area of air pollution. Lead pollution is down, particle matter has been reduced, and chemicals such as carbon monoxide and nitrogen dioxide are far less common.

But it’s still a concern.

While you should be aware of air pollution, people in certain areas need to be acutely aware of this issue.

Every year, the American Lung Association releases their State of the Air report, which gives statistics for the most polluted cities across the country. They give rankings in three different categories: ozone, year-round particle pollution, and short-term particle pollution. California, it appears, has a lot of work to do, as the top four spots in all categories are California metropolitan areas.

For ozone pollution, the Los Angeles-Long Beach area is the worst in the country, followed by Bakersfield, Fresno-Madera, and the Visalia-Porterville-Hanford areas respectively.

There are signs of improvement however, as Los Angeles has seen 86 fewer “high ozone days” per year since 1996.

For year-round particle pollution, the area of Visalia-Porterville-Hanford, in California, is the worst location. Major cities on the list include Los Angeles, Pittsburgh, Cleveland, and Philadelphia.

You don’t have to be in a massive metro area to suffer from air pollution. Bakersfield, a city of roughly 375,000 citizens, is the worst place for short-term air pollution. 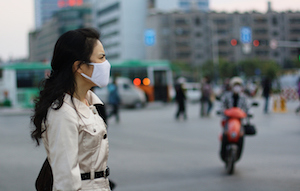 Air Pollution Across the Globe

Of course, the United States is not the only country dealing with air pollution. With industrialization and modernization taking place in regions across the globe, more nations are dealing with unhealthy amounts of air pollution.

A press release by the World Health Organization in 2016 said that 92% of the world’s people are living where there is air pollution exceeding the organization’s standards. They claim that nearly two out of every three air-pollution-related deaths occur in Southeast Asia and the Western Pacific regions.

According to Science Magazine, Karachi, in southern Pakistan, is the worst city in the world for ozone pollution. Researchers took multiple air samples in numerous cities, then calculated how many of these samples were above the harmful threshold. 32% of the samples from Karachi were harmful, compared to Los Angeles’ 20% and New York’s 7%. In Europe, Paris logged 16% and Istanbul reached 13%. 21% of the samples from Beijing were harmful, while Tokyo sat at 12% and Bangkok held 14%.

For particulate matter, the worst city, according to CBS News (citing stats from WHO), is Zabol, Iran, which suffers from dry conditions that bring massive amounts of dust to the area. Many cities in India, including Gwalior and Allahabeed, suffer from high amounts of particulate matter. This is often due to vehicle emissions, industrialization, and burning garbage.

A look at the top 500 cities seems to show a trend: many of the worst cities for air pollution are in China or India, with many Middle-Eastern, African, and Southeast Asian cities in the mix.

Living in a City with High Pollution

If you live in one of the cities listed by the American Lung Association, you’re not at the mercy of air pollution.

In fact, there are some important steps you can take to keep yourself healthy. You don’t have to hide at home, and you don’t have to wear a gas mask everywhere you travel.

With these tips, you can maintain a healthy, active lifestyle in even a polluted city.

First, you should check the current pollution levels in your area using the EPA’s AirNow feature. This feature gives you up-to-date information on the quality of air all across the country, with ratings that range from Good to Hazardous. The ratings combine particulate matter and ozone to calculate the rating.

This can be especially handy if you suffer from respiratory conditions, such as asthma, as you can decide whether or not to do outdoor activities. When pollution levels are high in your region, avoid strenuous outdoor activities.

The EPA is not the only organization that provides information on air pollution levels. Microsoft, for example, has created the Your Weather app, which combines air data and weather information to help you make a decision about when and how to travel outdoors.

You can also purchase your own air pollution sensors to get information on the quality of air, both indoors and out. Speck is a technology that reads information and provides data in an easy-to-use format. This tool can not only tell you what conditions are like outdoors, it can provide indoor information as well, allowing you to make smart decisions for your home.

Living in a city with air pollution means you are constantly exposed to contaminants.

For this reason, you should make your home a clean air haven. These principles, of course, apply to homes in clean environments as well!

Using aerosol spray, burning incenses, smoking inside, and many other activities will contribute to poor indoor air quality.

You already deal with it outside, so why make it worse indoors?

If particle matter is a problem in your community, consider wearing a breathing mask when you go outside. This may not be the most attractive solution, but it can keep you from breathing excessive amounts of dust or soot.

Anyone who jogs, walks, or rides a bike for exercise should avoid heavy-traffic times. It also helps to avoid trails and routes that run right next to congested highways. Also limit time in parking garages since they can hold exhaust fumes.

If your town suffers from poor air quality, take a few trips outside of city limits on a regular basis. This can be a great way to get outdoors without inhaling a significant amount of air pollution. Remember, however, that being in a rural area does not guarantee clean air; always check the AirNow site. 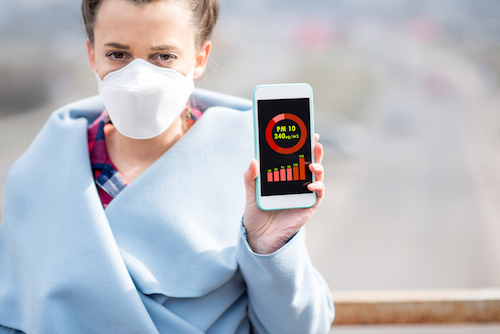 But what if you are traveling to a location with high amounts of air pollution?

Is there a way you can protect yourself and stay informed, even when you travel abroad?

Unfortunately, most countries don’t have a sophisticated system, like AirNow from the EPA, for measuring air pollution and relaying this information to the general population.

However, you can use your pollution-measuring technology, including home devices and wearables, to stay informed. Take these devices with you (using all security, protection, and safety measures, of course) and you’ll be able to know whether the ozone in Paris is high or whether today is a particularly bad day for particle matter in Beijing.

It also never hurts to discuss the issue with locals to understand air pollution and find sources of information that can help you stay healthy.

Give Yourself Healthy Indoor Air with Oransi Air Purifiers

Unfortunately, there’s not a lot you can do to make a direct impact on the quality of air outdoors. However, you can immediately change the quality of your air inside by using world-class air purifiers from Oransi.

If you live in a city with particularly high levels of particle matter, consider an Oransi air purifier that is effective for dust or smoke. The OV200 air purifier, for example, removes 98% of airborne allergens and particles while effectively cleaning a room measuring 400 square feet. (20 feet by 20 feet, for example.) It uses a HEPA filter and activated-carbon technology, and comes with a remote control for simple, convenient use.

The EJ Air Purifier is another effective unit that can clean a large area with ease. This purifier removes smoke, pollen, bacteria, and allergens thanks to a HEPA filter with a 17 out of 20 rating on the MERV scale. This incredible purifier can clean a space up to 1,500 square feet, making it effective for large rooms and offices.

For more information on our air purifier technology, contact the Oransi team or give us a call at 888-281-3948. Our helpful staff would love to make sure you have the right information for all your purification needs!