In recent months, extreme dry spells have been creating a drastic rise in wildfires, across the United States. As a result, the levels of wildfire smoke are higher than ever and continually rising. The smoke is most prominent in the West Coast, but has spread across many parts of the Midwest and South.  To help provide relief from the air pollution, HEPA Air Cleaners are being utilized to clear the air.

According to NPR, health departments in numerous states are taking extra precautions to make sure their residents aren’t affected. Yet, officials are concerned preventative efforts could be ineffective.

Beyond the lack of immediate resolution, a bigger concern might be that the spreading wildfire problem doesn’t appear to slowing down.

“Unfortunately, this may be the new normal for us,” says Jim Vannoy, program manager for environmental health programs at the Idaho Division of Public Health. “Not just for a day or two, but for weeks on end.”

With no end in sight for these detrimental wildfires, people can take precautions in numerous ways.

For schools, that means indoor recess and no outdoor sports practice when air quality levels are unhealthy, according to an advisory the public health department sent to Idaho schools.

Tiny particulates in smoke travel deep into the lungs, where they evade the body’s defense systems, Nolen says. That poses an especially big threat to people with asthma, cardiovascular disease or lung diseases. Children are susceptible even if they’re healthy, she says, because their lungs are still developing.

How to Protect Yourself

Staying inside is the best defense, Nolen says, with air conditioning set to recirculate air. Check the local air quality index before heading out. “If it’s anything above a code green, people will be affected.”

What makes for an Effective Air Purifier?

For an air purifier to improve your indoor air quality it needs to have sufficient air flow AND have filters that can clean everything in the air.

This is harder than it sounds because highly effective air filters tend to reduce air flow. So, if you then use a super-powerful fan you can end up with too much noise.

For a smokey room you will want 4 to 5 air changes per hour. What this means is that for a given room you want all of the air to be circulated through the air cleaner 4 - 5 times per hour.

Here is a handy chart that we put together to show you how our products compare.

What to Look for in the Air Filters

So, once you have enough air flow you will want to make sure the air filters are able to remove the smoke. This is not easy to do because smoke is made of of tiny particulate matter as well as smoke particles and gases.

Airborne particulates are solids that float in the air. Think of them like tiny dust particles. The best way to remove them is with a high-quality true HEPA filter. This is what we use in our EJ120 portable air purifier. In our ERIK650A model we go to a level higher than HEPA. To date have not seen any competitor with a HEPA filter that comes close.

So, now that you have a great HEPA filter to catch the fine particles you need something more because the smoke gases and chemicals are so small they will pass through any HEPA filter. It's possible they could get captured temporarily however they will be re-released so your room will constantly smell smokey.

To get rid of smoke smell you are going to want a high quality activated carbon filter. The key to carbon filter effectiveness is the quality of the carbon and the amount of surface area. We use coconut shell carbon which is the best available. In addition, rather than just have a lot of activated carbon by weight we focus on having the most surface area to give you the smoke smell removal ability you need without sacrificing the air flow of the air cleaner. 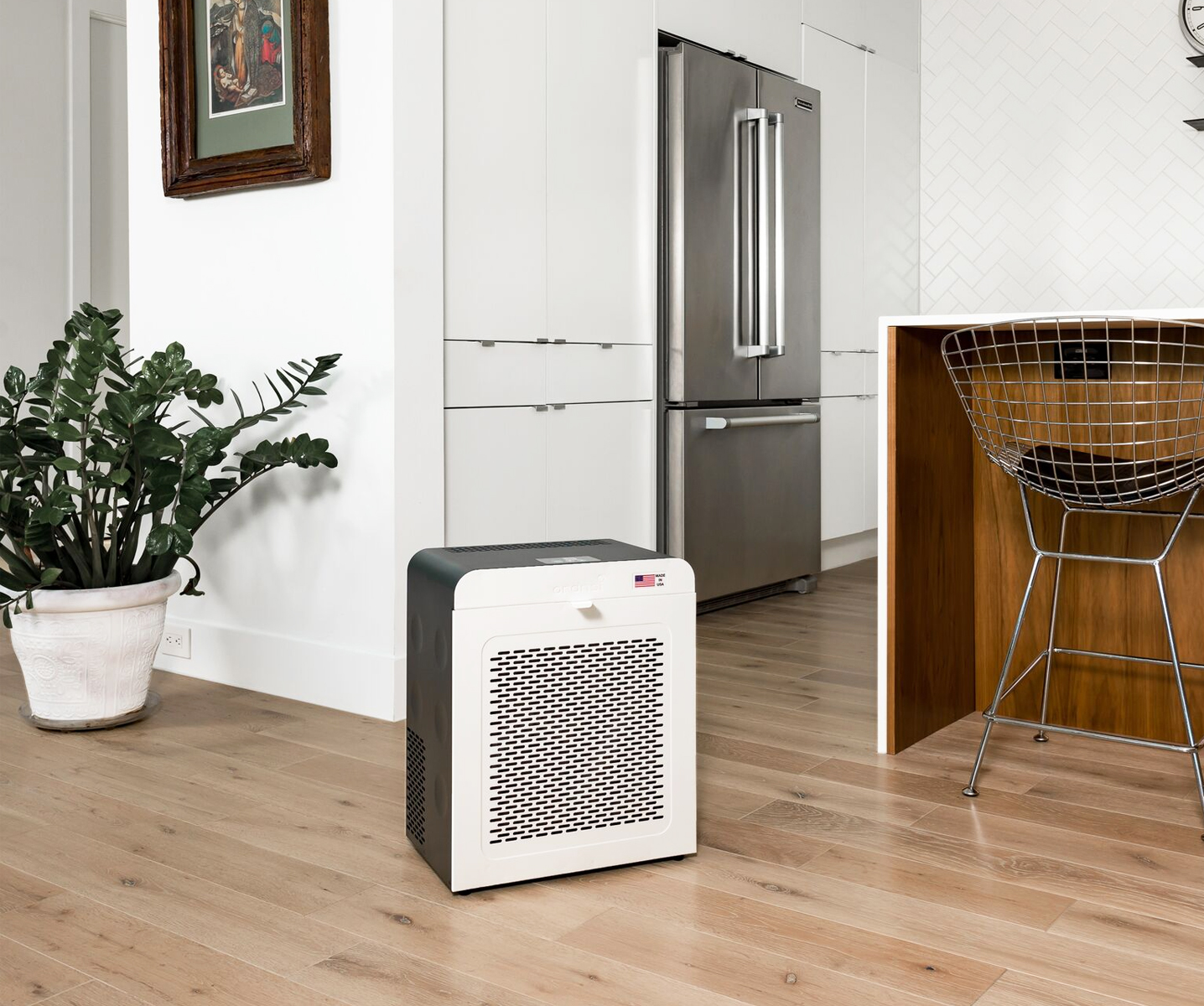 Our Air Purifiers For Smoke offer top rated HEPA and carbon filters, which remove 99% of all harmful airborne particulates from the air. So, even if you have poor air quality in your area from wildfire smoke, placing a HEPA Air Purifier unit in your home or office will provide an indoor clean air sanctuary, giving your lungs the clean air they deserve.

Another option to consider for indoor air pollution is a smoke eater.  Smoke eaters are used in home and office buildings to remove smoke odor to give you fresh, clean air.